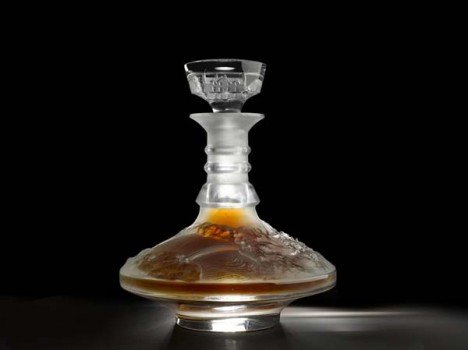 A bottle of 64-year-old Macallan, the oldest whisky ever bottled by the Macallan distillery, became the most expensive whisky in the world when it sold at a charity auction in November, 2010. The catch, however, is that the auction also included a one-of-a-kind crystal decanter.

The decanter was created by Lalique using lost-wax casting, called "cire perdue" in French. The decanter was created to celebrate the anniversary of master glassmaker René Lalique's birth. It is based on a decanter from the 1920s, when The Macallan distillery was founded. The crystal decanter and its expensive cargo have toured twelve cities to raise awareness for charity: water, including Paris, London, Hong Kong and its final stop at Sotheby's in New York.

The entirety of the sale price of this expensive whisky was donated to charity: water. In addition, US $145,000 were raised for charity: water during the Macallan's "tour du monde".

Charity: water is a non-profit organization that distributes water to developing countries.