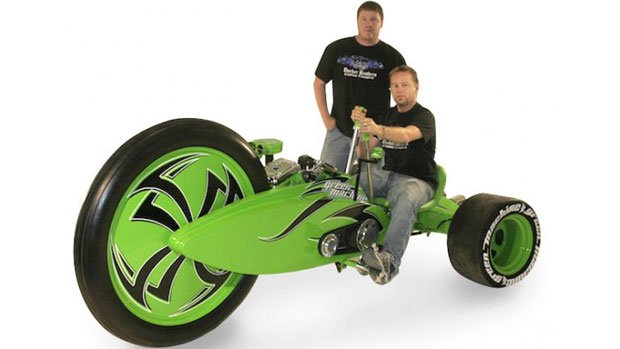 Did you ever have a Green Machine when you were a kid? Those big-wheeled plastic green tricycles? Tell me you didn’t pedal around on it making motorcycle noises and pretending you were going, like, 50 miles an hour. Well now you’re all growed up and you’ve put such childish things behind you. Now you can ride around on a 60 horsepower green machine that makes motorcycle noises for you. Because it is a motorcycle.

The resemblance to the toy of old is amazing, and entirely intentional. But instead of toddler-powered pedals, this baby’s got an air-cooled Harley Davidson Evolution V-twin engine with an 8 ½ gallon fuel tank that gives you about 400 miles.

Here’s the coolest part: just like the original toy, you steer this beast with two hand-held push/pull levers. No joke. It is literally the giant, motorized Green Machine you always dreamed of. And if you leave it parked behind your dad’s car and he backs out, it might just be the car that takes all the damage this time.