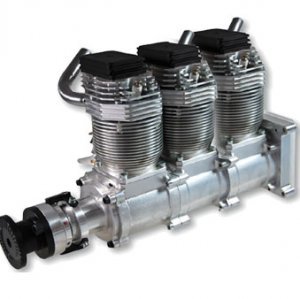 Lest you think Radio Control Aircraft are toys…feast your eyes on this engine from Kolm in Germany. Still in prototype stages, the IL200 is a 3 cylinder, 200cc, four stroke powerhouse designed for large scale, high speed racers and warbirds.

It’ll cost north of $5000 when production begins (and when it comes stateside). If you want to express your inner air racer, there is simply no better powerplant to bolt up to your giant-scale warbird. Pony up some hard earned cash (probably ~$20,000) for a suitable airframe and electronics, put down a pre-order deposit (link for info below) and blow the minds of those who believe model aircraft are the purvey of little boys.

And here is that link…because we know you want it.