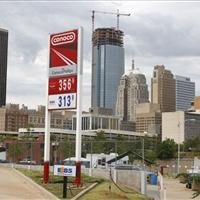 Oklahoma City has been named America's Manliest City by those well-known experts on manliness, the people at Mars Chocolate, who also make the ever-so-manly snack food COMBOS.

The company has run the COMBOS-sponsored survey for four years now, taking into consideration such data as "manly occupations" and the number of home improvement stores and steak houses. (Of course, it also considers how many "girly" things like nail salons a city has, which can drop a city in the rankings.)