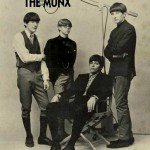 The Munx was a true one hit wonder from the late ’60s…but oh what a hit it was! Comprised of brothers Denny and Billy Earnest on guitar and keyboards respectively, and Bob Bensick on drums, the band recorded two local singles for the tiny Clevetown Records label in 1967. With perfect close harmonies and ornate arrangements, the Cleveland Ohio foursome found themselves on the charts in 1967 with this record. The chart action was such that it was picked up nationally by Jubilee Records where a follow up single was cut and released to no action. During their moment in the spotlight, they did open for The Velvet Underground .....get the rest of the story at InternetFM.com